This is an article I wrote for the humor section of Dawn Images (Newspaper). Leave your shoes at the door! 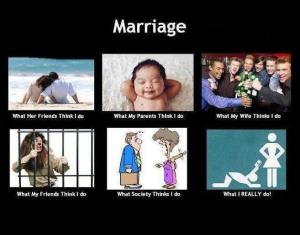 I know what you’re thinking, that this is some kind of pathetic joke; that’s because you haven’t met the in-laws yet. So you’ve seen a girl or two and met their families; nice quiet folks, polite and interested. It’s a trap, all part of the plan to snare unsuspecting, happily unaware innocent guys like yourself into the most complex and thorny role in the history of man. The son-in-law.

You think I am some jealous, lonely, scheming bachelor trying to keep you from marital bliss? Believe me man, there’s no such thing! I’m in it up to my neck, trust me. Married for five years now, or should I say I was sold into slavery five years ago by my parents with the connivance of my married friends. They couldn’t deal with my freedom — traitors. I am doing you a favour, giving you the inside story.

Before you are married, your soon-to-be mother-in-law calls up your mother to ask how you are and how your job is going. She cooks nihari (your favourite) and sends it over with your soon-to-be respectful young brother in-law. She and your future sister-in-law pick up the latest designer shirts for you when they go shopping and hope you like it, if not they get it changed. Future mother-in-law knows all your likes and dislikes; after your mother, she is the one who is most concerned about your well-being. Until you get married.

You remember that story about the kids who get lost in the forest and this nice little old lady lets them into her candy house? That’s the stuff I am warning you about dude!! She’s gonna sink her teeth into you. After you get married the only time your mother-in-law phones is to listen to her daughter’s complaints about you and your family. She doesn’t talk to your mother because your wife always reaches the phone before anyone else, no matter where she is in the house she can hear the phone ring and it’s always her mother calling.

When Saas-jee does talk to you on the phone, it is to inform you that she needs to go somewhere and she’s giving you the honor of driving her there. While you are driving, you will have to listen attentively as she tells you how to live your life and the errors of your ways. You will be required to make sounds of agreement, and nod your head in the affirmative; never, ever speak, even to agree. What you have to say is inconsequential, you must only nod.

Gifts will be bestowed upon you on birthdays, anniversaries and Eid. The apparel is usually last year’s sale leftovers that were going at 80 per cent off. And if you think there is no way you would be caught dead in a parrot green kurta, think again my friend, think again! You have no idea how your sali searched every shop in Ramazan, whilst fasting, to find you the perfect kurta. Sali.

The only dish your wife’s rude little brother brings over is your wife’s favorite, which coincidentally, is some weird tasteless concoction with an even weirder name. You are informed it is French and given a patronizing look by your sala, who has incredible tolerance in dealing with your inexperienced, simpleton ways. Sala. Beware of Daddy (susur jee), the once jovial, back slapping, ‘so pleased to have you as part of our family’ gentleman. You whisked his princess away, you don’t treat her right, and man he is no longer pleased to have you as part of his family. He will let you know this, often and publicly. Be prepared beforehand and have your doctor prescribe you some heavy antidepressants. Always take at least two before attending his dinner parties, that way you’ll be totally out of it and won’t realise you are the butt of all his jokes. Susur(a).

Never think of older sister-in-law’s husband as an ally just because you are in the same boat. Big mistake; he’ll sink your boat to ensure smoother sailing of his own. He lets you believe he’s on your side, but after you get married, he gets promoted. He’s Big Daddy’s spy, he’ll sell you out just to get an approving nod from the old guy.

And that’s the inside story, just a second, phone’s ringing, “Hello? Yeah I’ll be there in 10 minutes. What? Be there in five? No, no it’s no problem at all. Five minutes, I’m coming.” Sali. Do you have a painkiller?

17 thoughts on “Weekly Writing Challenge: Leave your shoes at the door!”