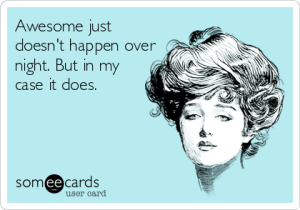 I am not going to give myself airs thinking I have been chosen by a Higher Power to show staggering patience and unbelievable tenacity so that I can complete some deep and meaningful task. I think God throws stuff at ( a select group of chosen) people like me to keep us entertained. Like having a desi guy as a husband (desi: of Indian sub-continent origin) or five wildlings for children. A germophobic health freak best-friend. Having a split personality: Angry Woman, Procrastination Woman, Can’t Stop Laughing Woman, Desi Mom, White Dad( let’s have a barbecue).

I found it very entertaining, for example, when desi guy ran a red light while cruising down the street at a leisurely speed:

Me: “You know you just ran a red light right?”

Prodigal Son (enjoying this highly): “Yes, oh my God. What were you thinking we could have been killed.”

The roads had been absolutely empty. No excuse though.

Me: “You are the one driving.”

Desi Guy: “This is your fault. You distracted me.”

With my incredible beauty? With my mesmerizing siren song? Had I been picking my nose? Whatever. It was my fault.

Speaking of noses and picking and stuff, teenager 1 wanted me to pierce her nose.

Teenager 1: “I can take it. You got it done that way when you were my age.”

Me: “By a village woman who had pierced the noses of half the country. It’ll be faster with a gun.”

Me: “Look at this needle. See how big it is. This is going to hurt.”

Me (packing lunches for school) “What?”

Teenager 1: “Can you pierce my nose again? The thread came out.”

Which wall shall I bang the frontal lobe of my cerebral hemisphere against?

My relatively new best friend is a doctor. She does not practice. Thank God. She is relatively new because although I have known her for three years, the first two I kept losing her phone number. I ran into her several times at Wal-Mart and school, each time I took her phone number and each time effectively managed to have it deleted via the kids. It was God’s way of telling me don’t bother, it is not meant to be. Then sometime last year I met her outside the school and dragged her to my house for tea. The tea I make is absolutely narcotic, people can never get enough and they keep coming back for more. I am a loud-mouthed-pajama wearing-female Dr. Lecter who doesn’t serve liver. Or kidney. Just tea, and I drag people I am acquainted with back to my house for that tea. I want to see what would happen.

Anyhoo…my relatively new best doctor friend has some peculiarities. She won’t let me shop at Food Basics because one of the cashiers there has a fungal infection which she diagnosed after observing it for half a nanosecond one day while shopping there. We can’t shop at the dollar store now either. Or Target. Or Suzy Shier or Winners. You know risk of frequent fatal fungal infections.

I wonder if her liver would go well with a spot of tea? Either way, I will just enjoy it.

2 thoughts on “Just Enjoy It”