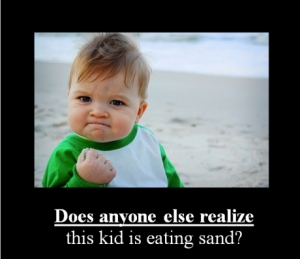 As a mother of five kids I have learned that it’s part of a normal (ugh!?) childhood for young children to put everything in their mouths. You have to be very vigilant. No matter how much you clean up and remove things from within their reach, they will find the most disgusting things possible to put in their mouths.

I have jammed my fingers between Firstborn’s little rose bud lips and extracted half eaten large black ants covered in baby drool. I can’t be sure if the poor creatures drowned or died of dismemberment. All my kids ate sand. After the first two I decided there must be something healthy in it and just let them sit behind the curtains and swallow that organic earthy goodness. If nothing, it helped them develop a great immune system.

Middle child was even more adventurous and once managed to down some phenol liquid (used as a cleaner). How she managed to climb up to a high shelf and retrieve it I don’t know. She also managed to unscrew the tightly closed cap. Anyways I thought she may have learned her lesson as the little blisters that popped up in her eyes, mouth and nose lasted some days. It was so painful, but she was ready for her next gastronomical adventure soon afterwards.

They would screech back, “we do eeef foap n toofpase!”

Then Twin 2 did the stuff mom nightmares are made of. She managed to get her hands on a bottle of Mortein liquid mosquito repellent and drank it down. She was playing happily after that and when I gave her a kiss I told her she smelt funny, my mom senses started tingling. She told me it was the funny thing she drank and then it hit me. We rushed her to the hospital and I had to hold her down while she got her stomach pumped. They usually keep the parents away at that time, but the two nurses and the stomach pumping guy couldn’t manage to keep her still so they called me in. Good times, good times.

Unfortunately none of my kids got any super powers in return, you’d think they would have. I honestly feel I deserve that much. I was positive Firstborn would be bestowed with Ant girl powers or Twin 2 would have some sort of super cleaning, mosquito repelling gifts that would benefit the world in some way or another.

Ah well, at least I am over that stage. Or I thought I was until I discovered Twin 2 licking her hands randomly as she watched T.V.  She didn’t even realize she was doing it. I stared at her for a minute.

“Did you just eat something chocolaty?”  I asked.

“No. Why do you have any brownies?” she asked hopefully.

“No, I don’t have any brownies. Why were you licking your hands?”

“EEEWW! You were licking your hands! We saw you!” piped up Middle child happily.

Everything is a damned competition. Always.

“No I don’t!” Twin 2 is the worst liar ever. She had a guilty smile on her face. Then she dove into my arms when I gave her the look.

“I don’t know,” she was still laughing.

“She likes the sweaty, salty taste!” Middle child exclaimed and then went into peals of laughter along with Twin 1. This is somehow considered a victory for them.

“Listen, you are almost eight. I thought I was done with this stuff by now. Do I have to keep running after you to make sure you are not putting everything into your mouth like a baby?”

“Good.” Hugs and kisses and cuddles. I love being a mom.

I had to remind her fifty different times after that to stop licking her hands. She’s trying to remember not to lick them.  Her sisters have agreed to help by reminding her when they catch her doing it.

I am beginning to wonder just how good that salty, sweaty taste is. Maybe I will lick her hands when she’s asleep to find out. Oh I wonder what kind of super powers could possibly come out of this?! Keeping my fingers crossed. 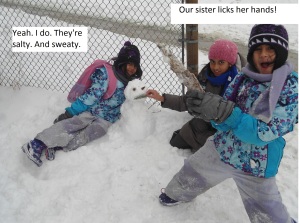 9 thoughts on “My youngest child likes to lick her “sweaty, salty” hands”